With this female character that will allow you to make platform games, tower defense, TRPG, jump, or run in an infinite scenario, the limits has this is the imagination and ability to use these animations.

It comes with 30 animations, which come in two presentations, with primary weapon (rifle) and secondary weapon (knife) and these are:

In this package will come:

·         A SVG file prepared in Inkscape that contains the corporal parts of the character, weapon and animancion of blow and shot

·         The separated images PNGs of the animations, being located an animation by folder

There is an example game where all the animations will be appreciated.

In order to download this asset pack you must purchase it at or above the minimum price of $5 USD. You will get access to the following files: 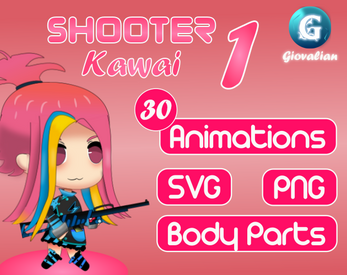